The tattoo convention in Monterrey Mexico is one of the biggest in the country. The one this year happened March 5-7... Look at the size of that crowd, that wasn't even ALL the people who were there. Behind the booths to the left were way more... Here we see the best tattoo of the day awards being given out, this guy ended up in 3rd place. 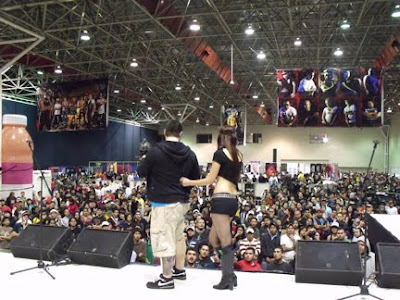 Here are some more images of tattoos which were entered. There are way more on my memory card... will put em up later. Any of you who tattoo that live in North America, take note.. these weren't even the winners. Mexico excels in black n grey, and realism...their style of traditional BLOWS AWAY the simplistic Americana shit we see constantly. 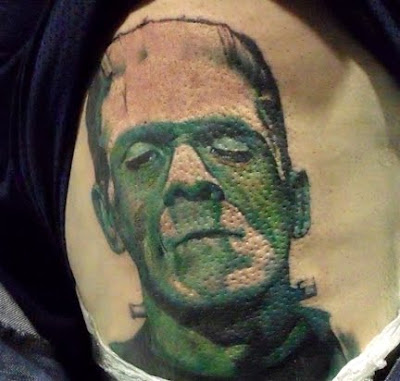 THIS TRIP WAS SO FULL OF COINCIDENCES!!
SO many that it seemed like they were meant to be. We were on our way to get some banners made, since we had forgotten ours, dropped off the art work, went to make some stickers and got directions for a taqueria which has a reputation for being the best around. On the way there, we saw a little gallery on a side street called the GODOY GALLERY... our last name is pretty rare, we decided to stop in and meet GODOY, the owner. The Gallery was small in the front part of it, a counter and TONS of art for sale... mostly pictures of women with big t*ts. There were post cards, business cards, sheets with descriptions of astrological signs and pairings...
We got invited to an art show that night, we went... coincidentally it was all tattoo related, another coincidence - it was put on by a friend of our - FLACO, in association with Dr. Lakra.!! 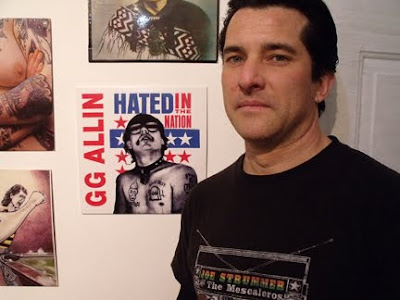 Here is Steve standing next to the part of the exhibit which showcased record covers which included tattoos. Here is GG Allin, the original scum f*ck. Steve tattooed him in 1986 with an exacto blade in Dallas Texas. It was a swastika inside an german cross. A few moments later, several tattooers whom we have know for a long time showed up!!! We met a photographer whose name was also GODOY!!! 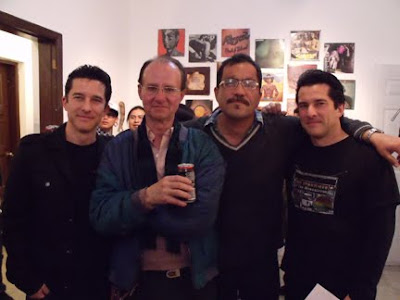 Here we are at the gallery L to R - Art Godoy, Gallery Godoy, Akylez, Steve Godoy. There was alot of traditional style tattoo paintings as well as some odd items like this one! This rubber baby arm was actually tattooed with a machine and needle. There were tons of single needle line work, small and perfectly shaded roses, faces of women, sayings... very well done. 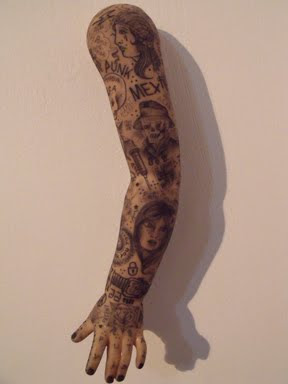 We also attended a Lucha Libre Femenil... all female wresting matches, which were held in a ring, outside!! It was great. All spectators were getting involved, between the women's fights, kids would go in the ring and beat each other up. Love to see that. The one in the purple glitter shorts is "Unicorn". She had a small horn in the middle of her mask. The one she's got in a hold is always seen doing the weather reports on TV!!! Unicorn kicked her ass by the way.. 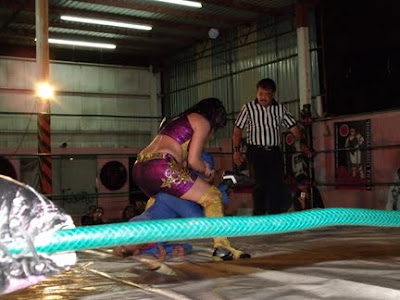 Juan "Super" Arreguin, won second place in the best tattoo of the day on Sunday. He works at Art's Funhouse Tattoo in Vancouver. To see more of his work go to www.funhousetattoo.ca, or http://www.myspace.com/superflytats. 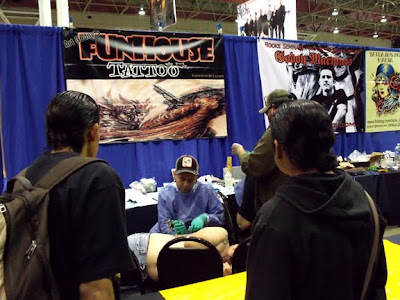 At the convention, we also met up with a long time friend "el Tigre" from Taxco Tattoo in Saltillo, Mexico. Such a great person. Not only is he a great artists, he's also a shamanic healer. He gets buried in the ground, digs his way out, walks for miles through the desert, eats some peyote, stares at the sun for hours... and then tattoos the next day... 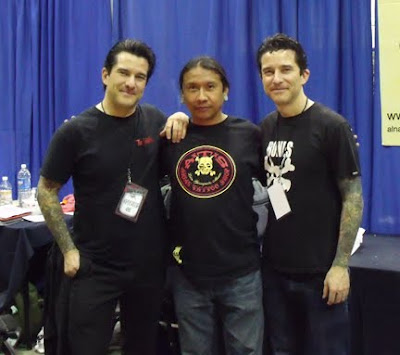 STEVE, TIGRE AND ART.
TIGRE had a convention about 6 years ago which we proudly attended. He had put together a sweat lodge. For those of you who don't know what that is. It's a ceremony where people gather under a totally enclosed Teepee, were there is a hole dug in the ground in the center of it. HOT rocks are put in it and then water is poured on... it's basically a sauna, which gets hotter round after round. You go a round, take a break, another and take a break and keep doing this cycle until you get to the end. The goal was to make it through all 8 rounds. Man, you sweat an sweat. The sweat doesn't just "drip" off of you, it runs off of you like a faucet! At the middle of round 7, when we were totally dying in the suffocating heat, El Tigre was saying a prayer to the creator when someone farted... f*ck. Nobody wanted to admit it... we said, "c'mon, who did it? just admit it!!" Good thing we were sitting by the door flap and got outa there. It smelled like a combination of boiled eggs and dog sh*t. Almost made it....
Posted by Art & Steve Godoy at 9:08 PM