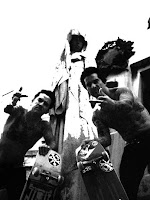 PRESS RELEASE
Held up to the tune of $100 000 000...
Google for yourself the words: 'IP internet theft' and hundreds of sites spring up insisting that downloadable digital property encryption IS a dead certainty. Mid 2008, brothers Steve and Art Godoy were just another couple of small business men crossing their fingers and jumping into the abyss of digital downloads. In many ways their small publishing business had been doing fine with a system based around mailing out hard copies of their book: TATTOO MACHINES & THEIR SECRETS. "Initially producing our book as a hard copy only allowed us to control our knowledge and the hands it fell into. Publishing the secrets of our craft was largely a way of sharing our findings amongst the tattooing community. This follows our philosophy of setting high standards and helping like-minded others to achieve excellence in their craft. We were also idealistic - we had an idea that a professional attitude and a book that spelled out our skills and standards could flush the bad operators out and lift the general profile of our industry. To a certain extent, and after ten years of hard labour, we felt like we were getting some way toward achieving this." With a deal of doubt, the brothers took the technology leap and had their 'tattooing tomb' (the book weighs in at 350 grams) turned into what they thought was a protected digital download. In their own words "we just thought it was time to update technologically. That the availability of our product was being limited by it's hard copy format. We got suckered in by a smooth talking IT guy who said he had a track record of never being cracked. We wanted to believe it. Little did we know that in under a year we would lose everything we had worked so hard for. In only 8 months, sales of our book have dropped by 92%." This is one of the major problems. Business people with a product in demand want to believe their IP is safe 'out there'. In their race to expand and stay competitive with new products entering the marketplace the hype around encryption is attractive. Dig a bit deeper though and the stats show that US based industries alone have been losing over 60 billion a year to IP theft since 2000 - with job losses of over 375,000 climbing steadily each year. Ask any savvy Russian businessman about the certainty of such encryption products and he will just laugh. They know too well that cracking encryption codes and duplicating files are child's play for IT pirates worth their salt - and there are armies of them out there. Nothing is safe as yet, and the company that comes out with bullet-proof protection, tested against the highest hitting hackers, will reap an unimaginable gold-mine. Art and Steve's advice?
"Stay basic, stay safe and in control of your product. Until a 100% proof protection product arrives on the marketplace don't even think about going digital. You can't go past a hard copy because at least you know where your product is, you get to sleep at night and you get a return on most of what you own".
This foray into online sales has cost the Godoy's hundreds of thousands of dollars in real sales with an actual $100, 000 000 in copies having now been downloaded as of last month - not exactly a cracker of a year for the brothers Godoy. "Our strategy now centers around damage control. It is a real shock to the system that so much of our time has to go into protecting what's left. We are basically going to have to come up with new or superior products to regain our market (laughs) - it's a shame we did such a good a job of it in the first place..."
Posted by Art & Steve Godoy at 11:33 PM